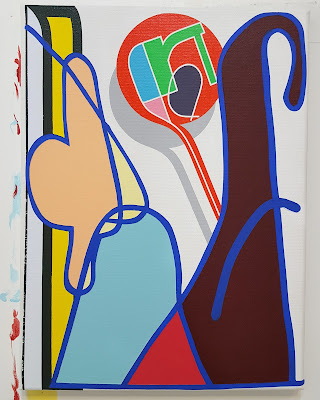 I was happy to help support Belladonna's last fundraiser as Belladonna is one of my favorite presses! Am looking forward to homing "Uni," a painting by Eric Shaw introduced to me by Belladonna. It's cool yet pops! And do check out Belladonna's publications which I heartily recommend!

Posted by EILEEN at 2:21 PM No comments:

We have one large and one small painting by Ron Ehrlich and we have adored living with them both over the years.  The image below is of the larger painting -- 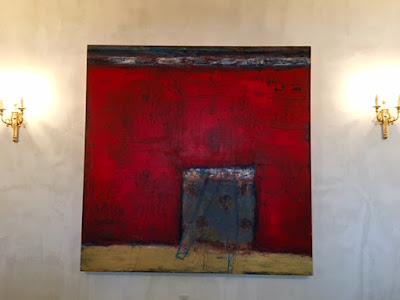 I appreciate this YouTUBE video for showing the paintings' lovely surfaces.

From a 2015 trip to New Orleans, we were blessed to bring home a work by Rachaela diRosaria.  We got a shadowbox painting by this fabulous tattooed artist and artist of tattoos: 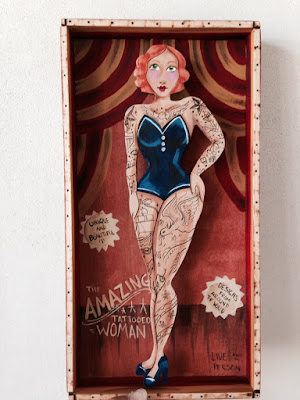 From our trip,  here also are photos of her (I love the phases of the moon across her face -- phase / face!), her supportive husband, and more of her works at the show where we met: 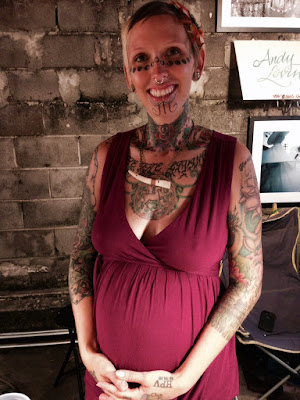 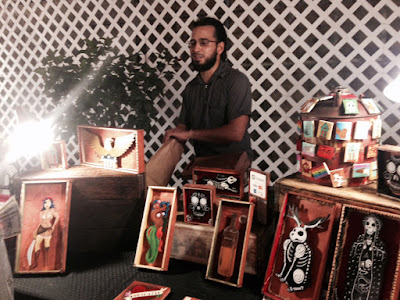 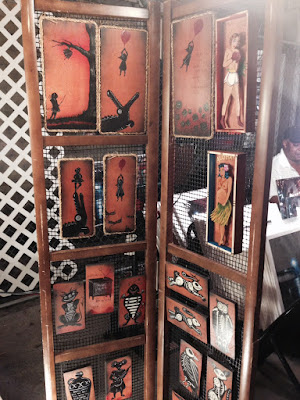 Posted by EILEEN at 5:30 AM No comments:

Denise Duhamel is known for her poetry. I don't know how much she practices visual art but, once, she also made this wonderful watercolor that is a cheerful presence in la casa: 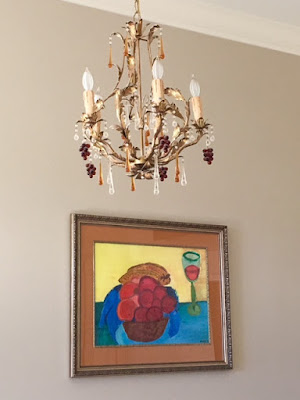 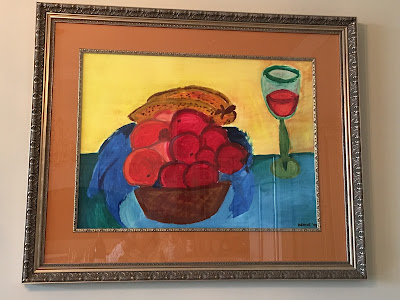 Posted by EILEEN at 7:50 PM No comments: 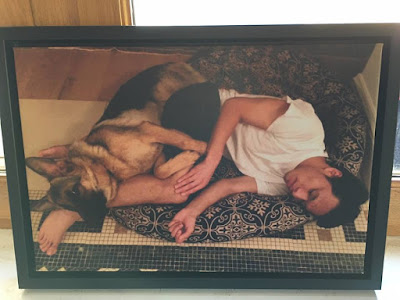 When it comes to art, I have no standards as regards German Shepherd tchochkes: our family welcomes GSD in all of its forms. Thus, here are our 2015 Christmas GSD paintings. We tried to evoke Vermeer's light with the top image of Athena and our son on the dog bed. Achilles poses by the second painting for which he  had modeled. We just heart our dogs! 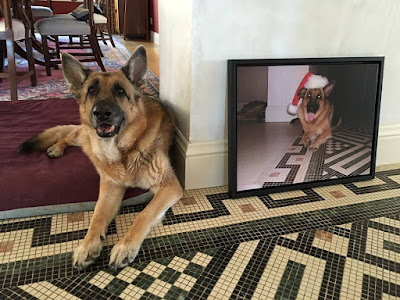 Posted by EILEEN at 7:11 AM No comments: 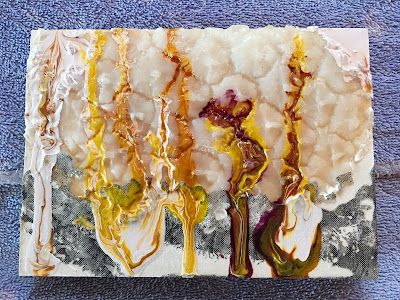 I acquired Rea de Guzman's "Pina Ooze" from a fundraiser for the worthy Filipino American Artist Directory. It arrived and looks so much better in person (ignore the ratty dog towel against which I photographed it please; but ratty dog towels are relevant for "living with" art). Do click on the image to see more of its resplendence!

I believe this piece is actually an artist's study for her "Filipinana (After Filipinana)" series. You can see more about the 2014-2015 series HERE, but here's an Artist's Statement about it:


A predominant symbol in this series of work is the pineapple. Originally, Spain introduced the pineapple to the Philippines (from South America). The Philippines is currently the world’s largest pineapple producer. A distinct feature of the pineapple is piña fiber, which can be extracted from leaves and woven with organza to make clothing. Historically, piña fiber became an ingredient, along with organza and muslin, in traditional women’s outfits known colloquially as “Maria Clara” (a metonym referring to a mestiza literary figure from Jose Rizal's Noli me Tangere, first published in 1887). The “Maria Clara” became tied to Philippine ideals of beauty and female social roles, underscoring a great irony: the native notion of beauty took on the dictated perspective of the colonizer and became recognized by clothing made from a foreign fruit. This trend continues today as popular Philippine ideas regarding beauty center on imported products, media perpetuation of westernized images, and the championing of myriad skin-whitening/bleaching products. 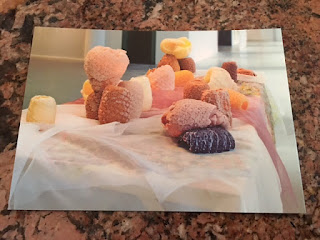 (Postcard for "Filipiniana (After Filipiniana)" series

I met Archie Rand through the poet John Yau. Both have collaborated several times and one of their collaborations is the etchings-based 100 MORE JOKES FROM THE BOOK OF THE DEAD. A print series of one of the etchings in the book is the charming "Cold Water Flat":

Now that you see the image above, you can chuckle with my placement of it in our wine cellar.

I was blessed that both gentlemen helped me inaugurate my literary and arts press, Meritage Press, and thankful that, as a result, I can also enjoy this charming etching.

I encourage you to check out the art of Archie Rand as well as the poetry of John Yau.